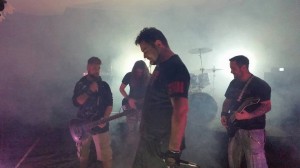 The band conscious of the difficulties having those who wish to propose an alternative to the music of the Italian scene since the early starts to work proposes a sound that is inspired from ’80s thrash metal roots. In July 2010, Lino Arzillo (drums) split the band and he is replaced by Filippo Ranieri. First jrecording: TEARLESS, a mix between Heavy and Thrash metal that brought the band to perform with major bands including Necrodeath, Michael Angelo Batio, Arthemis. Then after several split the band settles with the following members: Stefano (ex BETA 57)-guitar-, Lello (EX machine of hate)-guitar-, Ermes -bass-, Francesco (ex BURIAL IN SULPHUR,ex EMBRACE MY RUIN) -VOCALS-and Raffaele (ex KROM,ex NECROFAST PUTREFACTION, ex DEATHERIORHATE,ex CROWDEAD, ex BURIAL IN SULPHUR, ex FEASTBEAST, ex PSICOSY -vocals-.

The style of the band changed radically in a MODERN METAL way. In 2012, TURMA recorded a new song “BROTHERS” collecting several acclaim from friends and supporters. At the end of 2013, the band affects REBECCA’S SHIELD, that improve the visibility of the band….. During the recording session the band releases MEMORIES in May 2015..another new single…. Unfotunately Francesco (one of two singers) must leave the band to go and work in another town in north Italy, so Turma become a single singer group . After some months Stefano (rhytm guitar) left the band for personal reason…..he was replaced by Peppe Wylde…so with this formation the band took part at BATTLE BANDS contest for WACKEN 2015 playing a live in Milan with MR. RIOT, THE STRIGAS & VERATRUM peaking the third place. But the band has a new split….Ermes left the band to devote himself to the study…in the meantime enter in the group finally a human drummer (CIRO TROISI) and some months later FABRIZIO join in the group as new bassist…. the band with this members are finishing the recordings for a new album titled KRACKEN and in may 2016 is out KRACKEN the new single… the style of this recording is a little aggressive than past songs .

This entry was posted on Thursday, June 9th, 2016 at 5:29 am and is filed under Bands. You can follow any responses to this entry through the RSS 2.0 feed. You can leave a response, or trackback from your own site.

© 2013+ MetalStation.Org. All rights reserved.
This website uses "cookies" from Google to provide services in it to customize ads and traffic analysis. Information for use by your side is shared with Google. By using this site you agree to the use of "cookies.".Accept Read More